Rollins Chapel was completed in 1885, and at the time of the dedication of the Chapel, three memorial windows were in place in the chancel, and one in each transept. The original design of the Chapel incorporated a skylight and stained glass windows with the intent of maximizing natural lighting. The stained glass windows throughout the Chapel were dedicated to honor the past Presidents of the College. The Chapel was originally intended to be a Christian place of worship, and was donated for that express purpose.

In 1964, renovations to Rollins Chapel resulted in concealment of five stained glass windows commissioned for the chancel area of the Chapel. These windows depict Christian figures, given in honor of past Presidents of the College. Former Dean of the Tucker Foundation Richard P. Unsworth had the windows covered in the face of the declining spiritual interest in students. According to George Hawthorne, former College architect, Unsworth's idea was that by concealing the windows, students would be more attracted to the chapel.   The stained glass windows have a rich history and are of the finest quality; their artistic value alone made their restoration imperative. Accordingly, the college authorized the uncovering and restoration of the presidential windows in 2006. The windows can be covered when necessary for artistic or religious reasons. 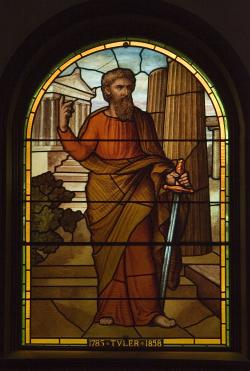 Window No. 1 in Rollins Chapel, which depicts the Apostle Paul.
The President Bennet Tyler window, which depicts the Apostle Paul, was given by Edward Tyler of Boston, MA. It was made by Donald McDonald of Boston. Mr. McDonald also made the two side transept windows, which depict Moses and St. James. The chapel dedication brochure describes in detail the President Tyler window: "He stands in the posture of a speaker, in the vicinity of a Grecian temple, his left hand resting upon a sword, which when so held denotes martyrdom-although when borne aloft, "fighting for the faith."

The usual colors of his dress, the blue tunic and white mantle of the Greek pictures, or the blue or green tunic and yellow mantle of latter works of art, here give way to a reddish and brown, more in accordance with the prevailing colors of the chapel."

Window No. 2 in Rollins Chapel, depicting the Apostle John.
The Francis Brown window was donated by Hon. Francis Brown Stockbridge of Kalamazoo, MI. The window was crafted by F. X. Zettler at the Royal Bavarian Stained Glass Works of Munich, Germany, one of the most celebrated manufactories in Europe according to the dedication brochure.

The original dedication brochure also describes in detail the figure, a depiction of the Apostle John: "He stands, his head encircled by the customary nimbus of the saints, his right hand raised in the mode of the Latin benediction, viz., the thumb and two fingers open and straight, the third and little fingers bent, the open fingers being said to symbolize the three persons of the Trinity, the closed fingers the two natures of Christ. In his left hand the apostle holds the traditional chalice with the serpent, referring, doubtless, to the alleged ineffectual attempts to destroy his life and the promises of Christ, Mark, vxi., 18. His tunic is of the traditional green, with red drapery, his attitude graceful, and the expression of his countenance benign and spiritual, and, as is customary, of almost feminine beauty. The figure may be regarded as a fine rendering of the traditional representation of the apostle. It will bear inspection as a work of art, while the entire effect of the window as viewed at some distance is bright and striking." 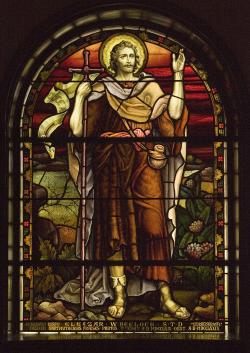 Window No. 3 in Rollins Chapel, President Wheelock's memorial window, depicting John the Baptist.
The chapel dedication brochure states that the central window in the chancel is President Wheelock's memorial window, depicting John the Baptist. The program records that the window was funded by Hon. Fredrick Billings and was made by James Ballantine and Son of Edinburgh, Scotland. The program notes that the window has a total of ten figures in it; with nine people listening to John the Baptist preach. However, we can now clearly see only one man in window #3 which is in accordance with both the picture provided by Joseph Mehling (above) and the picture found in the Rauner Library taken before the windows were covered. The window containing the ten figures is actually located in Bartlett Hall (window #8). And according to an 1896 article in The Dartmouth, window #8 was never in Rollins Chapel: "The stained glass window given by Mrs. Billings of Woodstock, VT., three years ago, in memory of Eleazar Wheelock is to be placed in the north side of Bartlett Hall. The window, which is a representation of John the Baptist, was never placed in the chapel because of the small size of the figures."

The Rauner picture of window #3 shows the bottom of the stained glass window which is clearly dedicated to Eleazar Wheelock. In his 1961 thesis paper on the architecture of Rollins chapel, Larry M. Ayres, Dartmouth Class of 1964 described window #3 and it is clearly the one represented in the Rauner picture. According to Ayres, John the Baptist is holding a banner which says, "Ecca Agnus Dei," that is to say, behold the Lamb of God. This was precisely John the Baptist's message in the Gospel of John, chapter 1: 29 "The next day John seeth Jesus coming unto him, and saith, Behold the Lamb of God, which taketh away the sin of the world." So Ayres appears reliable in stating that window #3 is dedicated to President Eleazar Wheelock and that it portrays John the Baptist. This collaborates with what we can see in both the Rauner and the Mehling pictures. However, Ayres states that the Ballantine firm of Edinburgh made the window. This seems plausible, but is unverified. Possibly, after the first window was found to be lacking in terms of the size of the figures, the Ballantine firm was re-commissioned to make another window, again of John the Baptist and dedicated to President Eleazar Wheelock. What is certain is that window #3 is a memorial window to President Wheelock and portrays John the Baptist.

John Wheelock Window, for the son of Eleazar Wheelock 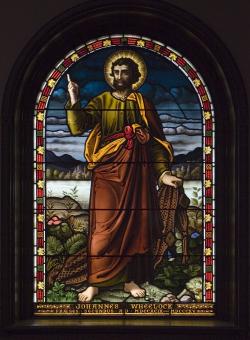 Window No. 4 in Rollins Chapel.
No records have been found regarding the specific nature of window #4. The figure may be St. Peter, considering he is holding a book, leaning on a rock, and possibly is next to the sea. However, this figure too appears to lack the traditional portrayal of St. Peter holding keys. Particularly frequent in the period between the fourth and sixth centuries is the scene of the delivery of the Law to Peter, which occurs on various kinds of monuments. Christ hands St. Peter a folded or open scroll, on which is often the inscription Lex Domini (Law of the Lord) or Dominus legem dat (The Lord gives the law). 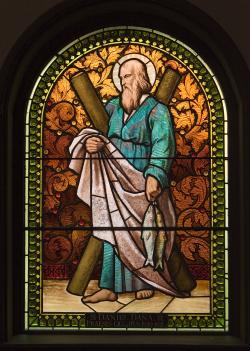 Window No. 5 in Rollins Chapel, a memorial to President Daniel Dana.
There are no official records found regarding window #5, as it was not in place when the chapel was dedicated. Since the windows were uncovered, an inscription at the bottom reveals that this window is a memorial to President Daniel Dana. We have no information about its maker or donor. Mr. Greg Gorman, a stained glass expert from Lyme, NH believed this window was of St. Andrew. Judging from the glass which we can see, this makes sense for a number of reasons.

First, the cross which is behind the central figure depicted is a decussate (sideways, in the shape of an X cross, ) singularly known to be that of St. Andrew. Secondly, it is believed that Andrew was bound, not nailed to his cross. The depicted figure does not have any signs of nail pierced hands or feet. "It is generally agreed that he was crucified by order of the Roman Governor, Aegeas or Aegeates, at Patrae in Achaia, and that he was bound, not nailed, to the cross, in order to prolong his sufferings. The cross on which he suffered is commonly held to have been the decussate cross, now known as St. Andrew's, though the evidence for this view seems to be no older than the fourteenth century." Finally, the figure in window #5 is holding two fish. Andrew was a fisherman when Jesus called him as a disciple, although he was not the only disciple who was a fisherman.

When Jesus decides that the multitude must be fed, it is the disciple Andrew tells Jesus of the boy who has two fishes. Jesus then feeds the crowd of 5,000, performing one of the more notable miracles of his ministry. Mark 1:16-18 "Now as he walked by the sea of Galilee, he saw Simon and Andrew his brother casting a net into the sea: for they were fishers. And Jesus said unto them, Come ye after me, and I will make you to become fishers of men. And straightway they forsook their nets, and followed him." John 6:5-9a "When Jesus then lifted up his eyes, and saw a great company come unto him, he saith unto Philip, Whence shall we buy bread, that these may eat? ...One of his disciples, Andrew, Simon Peter's brother, saith unto him, There is a lad here, which hath five barley loaves, and two small fishes:" It is profoundly unlikely that any Christian figure other than Andrew would have all of the stated characteristics. Especially because of the presence of the decussate cross, the identity of the figure in window #5 is almost certainly St. Andrew.