This year's theme was "Why Believe?  Hope and Action through Art and Spirituality".

About the 2021 Keynote Speaker 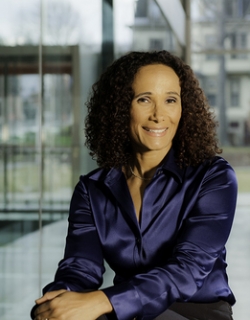 Born and raised in Harlem and the Bronx in New York City, Tricia Rose graduated from Yale University where she received a BA in Sociology and then received her Ph.D. from Brown University in American Studies. She has taught at NYU, and UC Santa Cruz and is currently Chancellor's Professor of Africana Studies and the Director of the Center for the Study of Race and Ethnicity in America at Brown University. Rose also serves as Associate Dean of the Faculty for Special Initiatives. In addition to her duties at Brown, Professor Rose sits on the Boards of the Nathan Cummings Foundation, Color of Change and Black Girls Rock, Inc.

Rose is an internationally respected scholar of post civil rights era black U.S. culture, popular music, social issues, gender and sexuality. She has been awarded for her teaching and has received several scholarly fellowships including ones from the Ford Foundation, the Rockefeller Foundation, and the American Association of University Women.

She is most well known for her groundbreaking book on the emergence of hip hop culture. Black Noise: Rap Music and Black Culture in Contemporary America is considered foundational text for the study of hip hop, one that has defined what is now an entire field of study. Black Noise won an American Book Award from the Before Columbus Foundation in 1995, was voted among the top 25 books of 1995 by the Village Voice and in 1999 was listed by Black Issues in Higher Education as one of its "Top Books of the Twentieth Century."

In 2003 Rose published a rare and powerful oral narrative history of black women's sexual life stories, called Longing To Tell: Black Women Talk About Sexuality and Intimacy. In 2008, Professor Rose returned to hip hop to challenge the field she helped found, with: The Hip Hop Wars: What We Talk About When We Talk About Hip Hop-And Why It Matters. Her essays can be found in a range of scholarly journals and public venues. She is currently working on a project called How Structural Racism Works.

Tricia Rose lectures, engages in conversation and presents seminars and workshops to scholarly and general audiences on a wide range of issues relating to race in America, mass media, structural inequality, popular culture, gender and sexuality and art and social justice. Rose has been featured on PBS, MSNBC, CNN, NPR and other national and local media outlets. More of her work can be found in scholarly journals, and more popular outlets.