The multifaith, multicultural service is held each year during Commencement weekend.

"Remember Who You Are" 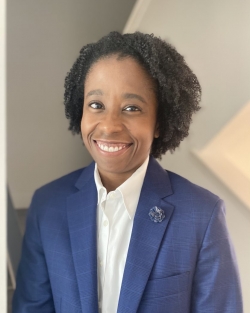 Kiva works collaboratively with internal employees and external clients to design and implement tailored strategies that lead to more diverse, inclusive, and high-performing organizations. She is an experienced practitioner with more than 16 years of DE&I strategy and implementation experience. She joined Material in January 2021 from Paradigm Strategy, a leading DE&I consulting firm that works with clients such as Twitter, Slack, NFL, and The New York Times. She previously spent six years at Facebook as one of the company's first hires in its D&I department. She quickly climbed to lead Facebook's D&I Talent Management with a focus on growing and retaining historically underrepresented employees.

Prior to Facebook, Kiva served as the Head of Diversity and National Outreach at The Peace Corps, where she developed and implemented its integrated diversity outreach strategy. She is a graduate of Harvard University and Dartmouth College, and she currently serves on Dartmouth's Review Board for Inclusive Excellence and the dev/color Advisory Board. A South Carolina native, she currently lives in Oakland, CA with her wife and son.

The Baccalaureate Service seems to have originated in the early 15th century at Oxford University in England. Each graduate was obliged to deliver an oration or sermon, in Latin, to demonstrate his worthiness to receive the degree of bachelor, signified by crowning him with laurels. This service is what we now call commencement.

In America, at religious colleges (like Dartmouth was at its founding and early years), the graduation ceremony included a church service, so that new graduates would understand both the seriousness of their new responsibilities and the true Source of all their achievements.

Today's service has evolved greatly since the days of Eleazar Wheelock. It is now a multi-faith, multicultural service in which we celebrate what we hold in common while also recognizing each tradition's beautiful particularities. It is a time of celebration and worship when we pause, as a college, to reflect and express gratitude and joy for our graduates.

Michael is an Assistant Professor of Epidemiology and of Immunology & Infectious Diseases at the Harvard School of Public Health and is a clinical pathologist at Brigham and Women's Hospital / Harvard Medical School, where he oversees molecular virology diagnostics. He is an Associate Member of the Broad Institute of MIT and Harvard where he has helped to develop one of the nation's highest throughput testing facilities for COVID-19, which tests samples from across New England.

At Dartmouth, Michael earned his AB as a Senior Fellow studying mostly at Thayer School of Engineering and in biological sciences. In his junior year he moved to Sri Lanka with the support of Tucker to gain experience in a Sri Lankan medical clinical and also to experience living in a Buddhist country. His time there led to a newfound practice of meditation for him which eventually led to ordination as a Buddhist monk.

As a part of his research and through a not-for-profit that he ran for eight years, Michael has spent numerous years abroad in a range of capacities, all related to public health and research towards the same aims.

Recently, his research has taken a turn towards understanding the epidemiology and immunology relating to SARS-CoV-2 (the virus that causes COVID-19) and he has been a nationally recognized scientist in the media and advising state, national and international governments, agencies, and financial institutions throughout the epidemic.

Jim Kenney '69 is the Executive Director of two major interreligious organizations: Common Ground, an adult study center focusing on the world's great religious, philosophical, spiritual, and cultural traditions and their implications for every dimension of human endeavor and experience and the Interreligious Engagement Project (IEP21), working with global religious communities to address the world's critical problems through cooperative partnerships with government, business, education, media, intergovernmental organizations, and civil society.

Jim was a founding trustee of the Parliament of the World's Religions and served as its Global Director from 1996-2002.  Until recently, Jim served as the Project Coordinator for the International Interreligious Peace Council, whose members include Nobel Peace Prize Laureates, the Dalai Lama, Mairead Maguire, Archbishop Desmond Tutu, and many other renowned spiritual leaders committed to working together for peace, justice, and ecological sustainability.

Jim graduated from Dartmouth College in 1969 with a BA in psychology. He was a member of Delta Upsilon (later Foley House) fraternity, Casque and Gauntlet, and Paleopitus. He was also very active in the theater department and was an avid skier.

Allegra Love is an immigration attorney and director of The Sante Fe Dreamers Project in Santa Fe, New Mexico.

Allegra began her career at Sante Fe Public Schools in 2005 as a bilingual elementary school teacher and followed her passion for working with immigrants to law school.  After graduating from the University of New Mexico School of Law, she came to work for the Adelante program of Sante Fe Public Schools, where she founded this project.  She volunteers extensively, both in her community and elsewhere, for organizations like the Santa Fe Youth Commission, No More Deaths, and New Mexico Dreamers in Action (NM-DIA).  Most recently, she has worked to defend Central American women and children detained on the US border.  She is a member of the American Immigration Lawyers Association (AILA).

Allegra has a BA from Dartmouth College, a JD from the University of New Mexico School of Law, and is a licensed teacher in the state of New Mexico.  She loves country music and riding around in trucks.

An author and surgeon, and the first Navajo woman to be board-certified in surgery. She is a member of the Ponderosa Pine (Tsinnajinnie) and Salt (Ashi'hii' Dine') clans. Alvord earned her undergraduate degree from Dartmouth College in 1979, received her doctorate of medicine (MD) at Stanford University School of Medicine in 1985, and completed her residency in general surgery at Stanford University Hospital. She served as associate dean, student affairs, at Dartmouth Medical School from 1997-2009, Central Michigan College of Medicine (2010-2012), and the University of Arizona College of Medicine (2012-2014).

"Ceremonies work at multiple levels, bur primarily they heal the mind, which helps to heal the body. Chant, song, prayer, and guided imagery are used, in an elaborate form of mind-body medicine. Subsistence living and environmental sustainability principles are also found in ceremony teachings, and are examples of how interconnection can promote sustainability theory and teach humans a way of living that honors and protects our natural world." - Lori Arviso Alvord