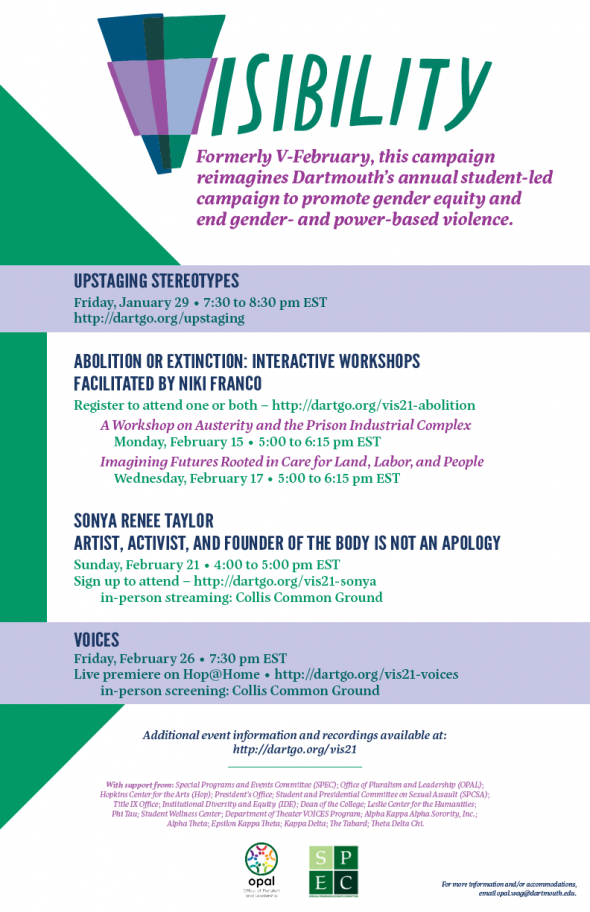 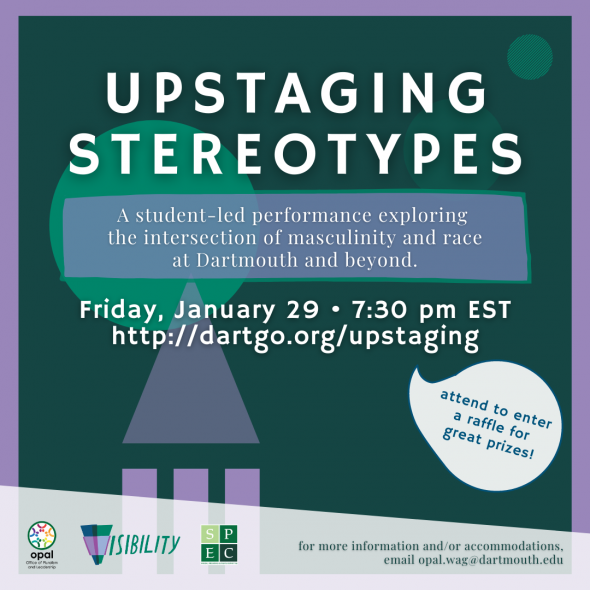 Written, produced, and performed by students, Upstaging Stereotypes explores how masculinity intersects with race and other identities – and how this intersection applies to Dartmouth and beyond. 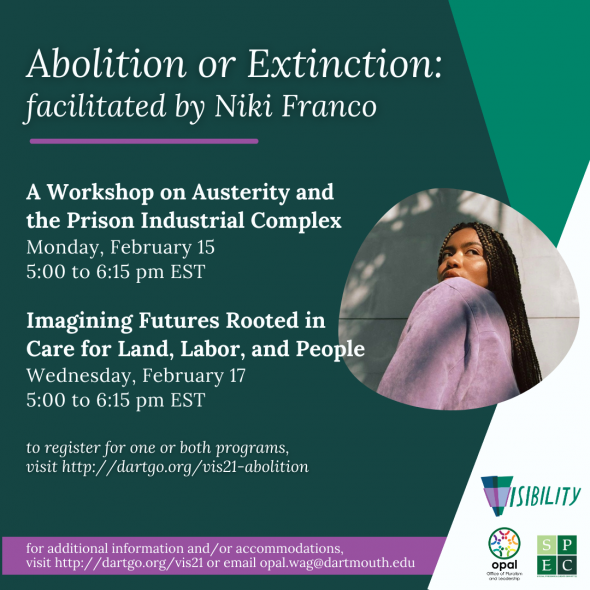 Recordings of both workshops will be available soon.

Niki Franco (she/they) is a Caribbean abolitionist community organizer, writer, and facilitator of spaces for collective study. Seeking to disrupt the institutionalized bureaucratic frameworks of academia and transactional ways in which relationships exist under capitalism, her work experiments with truth-telling, radical history and thought, and revolutionary imagination. Niki also curates educational and cultural programming that navigates the current urgency on global solidarity, environmental and ancestral preservation, and strategies on building emotional and intellectual capacities to dismantle systems of oppression that inform and deform our current lives. She is the host of "Getting to the Root of It with Venus Roots," a podcast that leans into conversations with artists, theorists, and organizers.

Currently based in Miami, Niki serves as the Political Education Director for (F)empower MIA and Civic Engagement Organizer for Power U Center for Social Change.

Sonya Renee Taylor: Artist, Activist, & Founder of The Body is Not an Apology 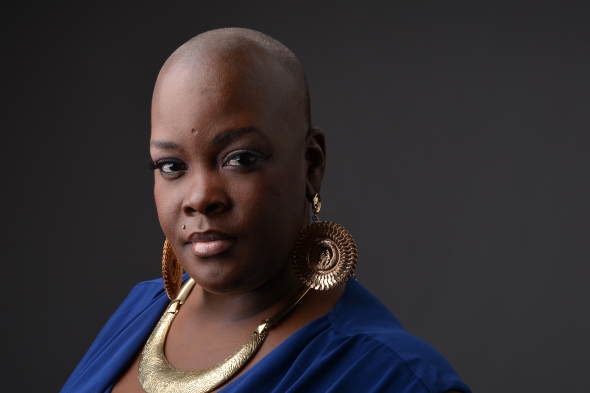 Closed captioning/live transcription and ASL interpretation (by Janet Dickinson, CI & CT) will be available and this event will be recorded. Recordings will be publicly available for one week once captioning is finalized.

In the midst of both a global pandemic and various uprisings against oppressive systems, how are radical self-love and community care crucial tools for a lifelong fight for liberation and justice? Join us for a conversation with Sonya Renee Taylor, founder of the Body is Not An Apology, and Katrina Battle, a grassroots community healer and organizer based in Vermont!

Dartmouth undergraduate student attendees can enter a raffle to win a signed copy of Sonya's book, The Body is Not An Apology, 2nd edition!

Purchase a copy of The Body Is Not An Apology, second edition, from Still North Books & Bar and 20% of sales through February 28, 2021 will be donated to WISE, a local nonprofit that provides crisis advocacy and support for people and communities impacted by domestic violence, sexual violence, and stalking within 21 communities of the Upper Valley of New Hampshire and Vermont.

Sonya Renee Taylor (she/her) is the Founder and Radical Executive Officer of The Body is Not An Apology, a digital media and education company promoting radical self-love and body empowerment as the foundational tool for social justice and global transformation.

Sonya's work as a highly sought-after award-winning performance poet, activist, and transformational leader continues to have global reach. She is a former National and International poetry slam champion, author of two books, educator, and activist who has enlightened and inspired organizations, audiences and individuals across the US, New Zealand, Australia, Germany, England, Scotland, Sweden, Canada and the Netherlands as well as in prisons, mental health treatment facilities, homeless shelters, universities, festivals, and public schools across the globe.

Believing in the power of art is a vehicle for social change, Sonya has been widely recognized for her work as a change agent.  She was named one of Planned Parenthood's 99 Dream Keepers in 2015 as well as a Planned Parenthood Generation Action's 2015 Outstanding Partner awardee. Bustle Magazine named her one of the 12 Women Who Paved the Way for Body Positivity and in September 2015, she was honored as a YBCA 100, an annual compilation of creative minds, makers, and pioneers who are asking the questions and making the provocations that will shape the future of American culture; an honor she shared alongside author Ta'Nahesi Coates, artist Kara Walker, filmmaker Ava Duvernay and many more. In 2016, she was named a Champion of Women's Health by Planned Parenthood and commissioned to write the official poem for Planned Parenthood's 100-year centennial celebration. In the same year, Sonya was also invited to the Obama White House to speak at their forum on the intersection of LGBTQIAA and Disability issues. In 2017, Sonya was awarded the Quixote Foundation's "Thank You Note, a $25,000 award for leaders and artists working in the field of reproductive justice. In the fall of 2017, Sonya was named one of 28 global changemakers selected into the inaugural cohort of the Edmund Hilary Fellowship, a 3-year international fellowship of world-leading entrepreneurs and investors, innovating purpose-driven global impact projects from New Zealand.

Katrina Battle (she/her) is a Black Vermonter from a biracial military family with roots in both the economically diverse rural town of Milton, Vermont and the rundown steel mill city of Gary, Indiana. She is often acknowledged for her relentless commitment to, in her own words, "Dare to Complicate." However, this approach didn't just come from the nuances in her origin story. Katrina has spent most of her life supporting the development of communities and teams across a variety of industries. This has included growing churches across the city of Philadelphia, Cinemark Theater's busiest US location, and various iterations of the Vermont Statewide People of Color Caucus Organizing Project.

Her love for her hometowns, coupled with her personal experiences growing up as an ethnically ambiguous Black child from low-income families has driven her "root doctor" skills to economic and racial liberation work across the state of Vermont. While her current areas of service include being an active member of the Black Lives Matter of Greater Burlington & Street Dance Activism Collectives, & coordinator for the Vermont Freedom School Project, her past community work includes co-founding the Milton Inclusion & Diversity Initiative & the VT Coalition for Ethnic & Social Equity in Schools, being a mentor for the Milton Students for Social Justice Cohort, & serving as a Coordinating Committee Member for the VT Poor People's Campaign: A National Call for Moral Revival.

While recognizing that we need a variety of strategies, methods, and people to achieve justice, equity, and liberation for all peoples, Katrina personally identifies as a fat, neurodivergent, abolitionist Black woman with chronic illness. In January of 2020, she made a commitment to shift her focus from the work of dismantling existing systems and structures to cultivating a culture of building new ones. Practically, she labors to bridge gaps of understanding & accountability—primarily working with grassroots organizations & Black community leaders to facilitate the critical, and often uncomfortable, conversations required when seeking to transform the way we relate to ourselves, our labor, and our people. 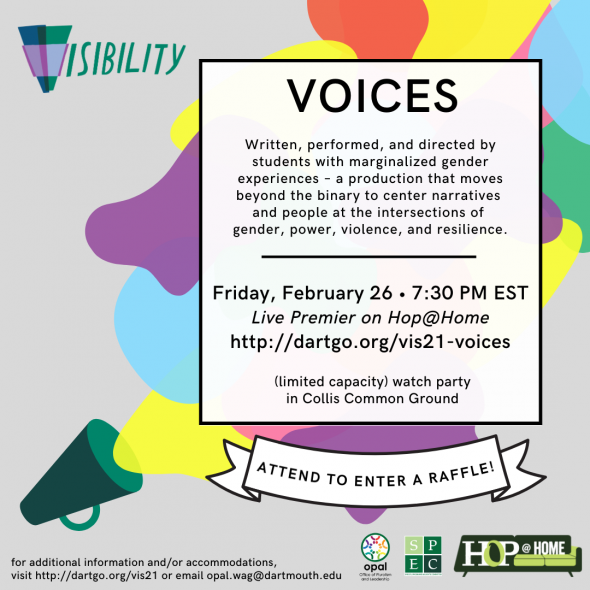 Friday, February 26 • 7:30 pm EST
Watch the video of the event: http://dartgo.org/vis21-voices (available until Friday, March 5)
Video of the Q&A with the Voices cast will be made available soon.

Since 2014, Voices has provided Dartmouth students of marginalized gender identities an opportunity to write, direct, and perform their stories and experiences through various means of artistic expression. Written, performed, and directed by students from marginalized gender experiences, Voices moves beyond the gender binary to center narratives and people at the intersections of gender, power, violence, and resilience.

Stay after the show for a casual Q&A with the cast and an opportunity to win raffle prizes including Hanover gift cards, books from Still North Books & Bar, sweatshirts, and a one-year subscription to a mindfulness app created by women of color!

All recorded virtual programs will be available at the listed event link for one week. For additional information and/or accommodations, email opal.wag@dartmouth.edu.