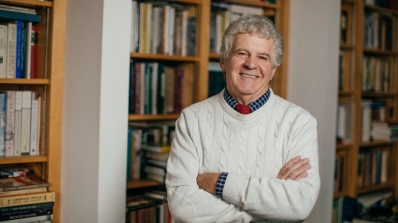 Shared in the May 4, 2020 NAP Weekly Newsletter

My best advice in a time of crisis is don't listen to a professor in a time of crisis. I have no business giving you words of wisdom. Not (just) because you're Native and I'm not, but because I have no business offering anyone words of wisdom at a time like this. I've never experienced a pandemic before, of course, but I've also not confronted events that demanded much self-sacrifice.  Sure, I've experienced tough times, hard decisions, scary health issues, loss of loved ones, and occasions when I had to take a stand, but in general I've been pretty fortunate. Of the gang I hung around with as a teenager in a northern England village, only three of us went to college; the rest left school at 15 or 16 and most went to work in mills that have long since closed. My parents made sure I went to college because they didn't—they served in the Second World War instead, which took six years of their lives. (That's how they met; I wouldn't be here if it hadn't been for Adolf Hitler). I've never had to put my life on hold, let alone on the line.

As this crisis weighs on me, I think of my Scottish grandmother. Jessie McLean went to work when she was maybe 13 or 14 as a "tweenie" (a housemaid cleaning "between" floors—in other words, the stairs). She lived through the First World War, the Spanish flu epidemic, the Great Depression, the Second World War, raised eight children, and lost another as a baby. She lost her husband during the Second World War and, as did many families in rural areas of Scotland and England, she took in kids who were evacuated from the big cities being bombed in German air raids. Adding two or three scruffy, dirty, and tough little guys from the slums of Glasgow to a household of mainly teenage girls was not easy and my mother complained, once. I never heard my grandmother raise her voice or say a cross word but many years later my mother still remembered the telling off she got that day. In a life of many hardships, Grandma McLean always extended kindness to those with heavier burdens to bear and she expected her daughter to do the same. At Dartmouth we often say that a liberal arts education prepares one for a life well lived.  Grandma McLean did not get that education and her life was poor by many of today's standards, but she lived her life well.

Consideration for others might seem out of place in these Darwinian days, something the president would associate with "losers." But an old lady's quiet kindness is worth more than a bully's bluster. Whichever class you are in, you are going to graduate into an uncertain world and will be called on to make it a better place. Dartmouth teaches things that can help you, and of course you can't be here right now. But you don't need an Ivy League education to be kind, and how well you live your life will depend on your human decency more than your GPA. I have no more experience dealing with a pandemic than you do, but I do know that, in imagining and achieving a better world, nothing matters more than how we treat each other.

But you don't need an Ivy League education to be kind, and how well you live your life will depend on your human decency more than your GPA.
--Colin Calloway