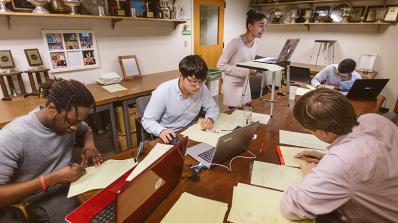 We are committed to an interdisciplinary approach to debate that promotes critical thinking.  The DFU serves Dartmouth’s mission of supporting the vigorous and open debate of ideas within a community marked by mutual respect in co-curricular activity.

The Brooks Cup was established in 1922 by George R. Brooks ’22 of Lynn, Mass. in honor of his mother. It is awarded annually to the outstanding debater of the year. Winners have their names added to the Brooks Cup.

An Endowed Prize awarded to debaters for competitive excellence.