Meet Angela Zhang at the Lunch Discussion on Impact through Education on Oct 14th. 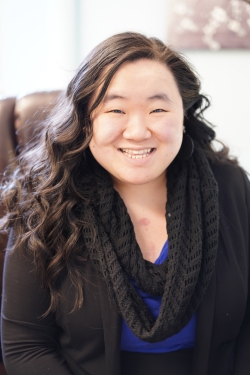 Originally hailing from Virginia and now living in Lebanon, NH, Angela Zhang earned her B.A. in Geography at Dartmouth College in 2012 and her Master of Social Work at the University of New England in 2018. In 2017, Angela began working as the Programs Director at LISTEN Community Services, a social services agency based in Lebanon dedicated to helping meet the critical needs of Upper Valley individuals and families. In her work, she is actively involved in fighting poverty, homelessness, and racism in the Upper Valley. She believes strongly in building community, mutual support, and visibility for BIPOC communities; in 2020, Angela co-founded the BIPOC Social Workers of Northern New England affinity group. She also teaches at the Social Work department at Plymouth State University. In her spare time, she volunteers as a crisis line advocate for WISE, and serves on the Board of Directors for WISE and Twin Pines Housing Trust. Angela was named the 2022 Social Worker of the Year by NASW NH.