Meet Salil Tripathi at the Desserts with Distinguished Alumni event on October 14th add at the Lunch on Carceral Issues on October 15th. 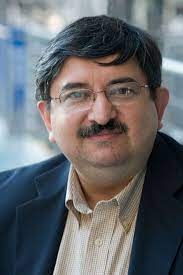 Salil Tripathi was born in Bombay, India and lives in New York. Salil studied at the New Era School in Bombay and graduated from Sydenham College at the University of Bombay, and later obtained his MBA  from the Tuck School of Business Administration at Dartmouth College. Currently, Salil is a contributing editor at the Caravan and writes for Mint. He chaired PEN International's Writers in Prison Committee from 2015 to 2021. Between 2009 and 2013, he was on the board of English PEN, where he co-chaired English PEN's Writers-at-Risk Committee. Salil has written for many publications around the world, including The Wall Street Journal, Washington Post, New York Times, New Yorker, and the Guardian.

Breaking the Mold is co-sponsored by the Center for Professional Development, the Tuck Center for Business, Government, & Society, the Rockerfeller Center for Public Policy and Social Sciences, and the John Sloan Dickey Center for International Understanding.